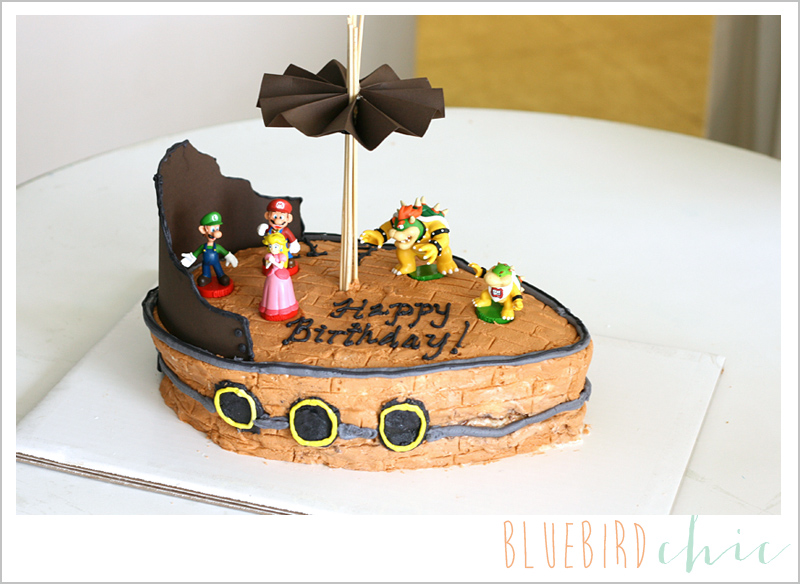 One of the reasons that summers fly by around here is that both of our boys celebrate their birthdays just a few days apart in July. They start thinking about what kind of cake to request of mom in oh, I’d say, about May. And while I’m no pro, I do make an attempt to pull off whatever they come up with. Last year, it was Bowser’s castle, this year, they requested the doomship.

So I pulled up my favorite trusted yellow butter cake recipe, a jar of homemade strawberry jam (for filling), and my favorite buttercream frosting, and started brainstorming. This is far from perfect, but it sure made our boys happy. And I think happy is better than perfect, any day! 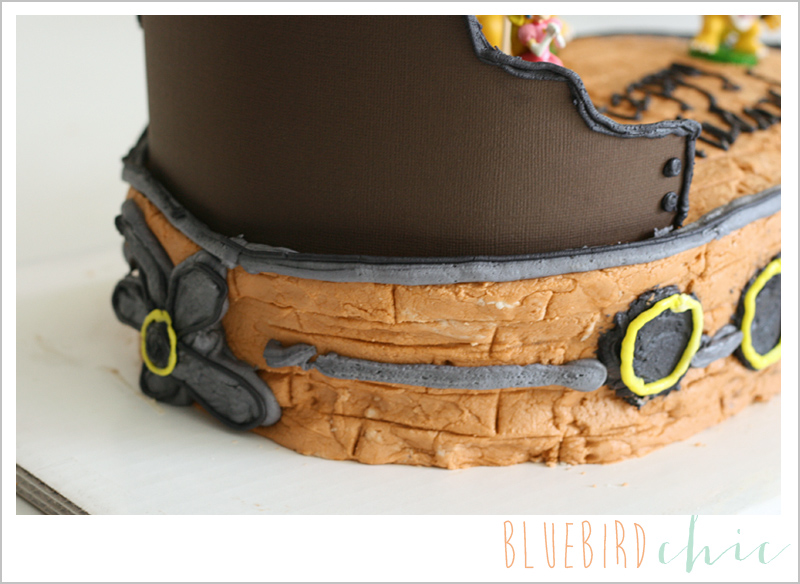 The back end was a bit squished because a.) I used jam for the filling, which tastes incredibly yummy, but isn’t as stable as frosting b.) I initially tried to build that crazy wooden filigree parapet thingy with cake. Which was a fail. I ended up going with cardstock that I had on hand and it worked beautifully.

~ I used two recipes of the yellow butter cake recipe, baked in two 9×13 cake pans. There was a bit of extra batter, which I poured into a round pan and just had as leftovers.

~ After cooling the cakes, I layered them on top of 10″x14″ Wilton cake boards from my local Michael’s. Because the cake is large and heavy, I layered three cake boards together, and ran a bit of packing tape around the edge. The triple board gave me a lot more confidence while transporting the cake.

~ To create the ship shape, I just took a sharp serrated knife and cut portions off. A 9″ round cake pan served as a great way to trace the back portion to make it round. I also brought the front end to a point by cutting a triangle portion off of each side.

~ I always find that the characters are much easier to add using an action figure set. This time I used the boys’ Mario chess set (after giving the pieces a good washing, of course.)

~ I made the upper propeller using strips of cardstock that I accordion folded and attached to a cardstock circle to secure. Before gluing, I punched several holes in the center of the circle to create a hole large enough to slide a group of bamboo skewers through for the mast. (You can see the underside of the propeller mast in the final photo above, after we removed it from the cake.)

~ Always crumb coat the cake before adding the frosting to decorate! It makes the finished cake much prettier.

~ To create the deck boards on the ship, I just gently pressed a knife across the cake in lines. I finished with a few circles as nails using the top end of the bamboo skewers.

~ To make the back wood filigree piece, I just eyeballed the pattern, cut from brown cardstock, and gently pressed the piece into the round portion of the back end of the cake. I then trimmed it up a bit with some of the black colored buttercream.

All in all, it was a bit of work, but hey – they’re only young once, right?