In 2009, Kate Moss famously stated when asked if she had any life mottos, “Nothing tastes as good as skinny feels.” She received so much backlash for that single comment, that I’m sure that she regrets ever having opened her mouth. I’m not here to add to the controversy, just give my take.

As someone who has struggled on the heavy/unhealthy end of the spectrum from an early age, lost the weight {to the tune of about 75 pounds} in highschool and college, then regained the weight {yeah – 75 pounds again} when I was pregnant with our oldest son, and finally losing it for good when he was about 2 years old, I think I can offer a perspective that a lot of women can identify with.

You see, I had to change my perspective. Today, I’m happy, healthy and slim. It didn’t come from surgery or a special diet. There was no magic formula or special exercise routine that made me drop the weight like it was going out of style. I still have days and moments that I reach for something I shouldn’t, and have to remind myself of my new motto: 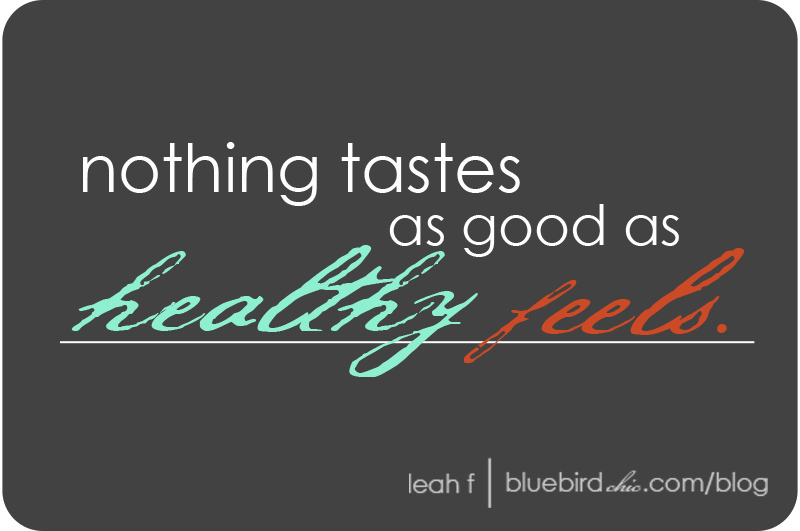 I’m so embarrassed now to admit, that there was a time in my life when I could eat a six pack of reese’s peanut butter cups in one sitting while reading a great book.  I’m talking about a total of 12 peanut butter cups.

I didn’t exercise much, for various reasons. I was young, but I wasn’t very motivated to do much physical activity. It just wasn’t my thing. I don’t blame my mother for things she didn’t know. Thankfully, we ate plenty of veggies growing up, but my mom didn’t have a really great handle on nutrition, so even though she did her best, we still we just kind of bumbling around trying to figure out what was ok, and where to draw the line. I’m thankful that she’s doing well on her own health and fitness journey now as well.

Back to me. By the time I reached junior high, I was pretty big. I don’t have a lot of photos of myself back then, because, secretly, I wasn’t happy with the way I looked. I was roughly a size 18. Big enough for someone so young. And I knew I needed to change. But I didn’t really know how. Or what. I can’t really tell you the details of how I lost that weight. I started exercising a lot. Stopped taking second portions and eating as much candy. But I can tell you that lot of it had to do with pressure to be thinner. And not to be healthy. So I did things that I shouldn’t. Like calorie restriction – but instead of eating a healthy bowl of veggies, I would grab a candy bar. Yeah – I lost weight, because I restricted my intake and was exercising, but that is SO unhealthy. Fortunately, I was young enough to not have some permanent damage for my silliness.

I finally went down to a size 8. But I still didn’t have great things to say to myself about how I looked. I cursed in the fitting room when the trendy jeans wouldn’t pull very far over my knees, as my eyes filled with tears.  I could never accept the way that God had made my body. I would never be stick thin. Though I did learn to accept myself better over the years, it took time. And someone else seeing me as beautiful inside and out.

Fast forward to meeting my now husband of ten years. He met me and loved me. Inside and out. And when I gained that 75+ pounds back when I was pregnant with our first son – he never, ever said a word. He was with me through the pints of haagendaz, homemade alfredo, and dove bars. And he’s been by my side over the years as I’ve made changes, learned and grown {or shrunk?}. He listened when I talked about switching to organics, and agreed when I talked about cutting back on certain foods… and when this past year, I talked about becoming a vegetarian because of some health problems I was having, he said, “Go for it!”

How did I go from this person who so easily gained back so many pounds to being able to maintain a healthy weight and fitness through a second pregnancy? I’ve currently been pretty much the same size for around 7 years. It’s not by starving myself. Or not enjoying what I eat – I promise you. I worked in the industry for a few years, and learned under some pretty awesome cooks, chefs, and bakers. I still enjoy sweets and yummy foods. But I’ve learned balance. Moderation. Nutrition. I’ve learned a lot about exercise and where it belongs in our life.

I’m not a “professional”, but I can share my journey with you over the coming weeks. In the hopes that the principles I learned can help you on yours. I can honestly say that it’s really true.

Nothing tastes as good as healthy feels.